After months of waiting, the RusTrans project leaders – Dr Muireann Maguire and Dr Cathy McAteer –  finally headed out at the start of November to ALTA42, the annual American Literary Translators Association conference held in Rochester, NY State. We were attending in order to spread the word about the ERC-funded RusTrans project – making Russian-to-English literary translators aware of our research into what they do, and hopefully persuading some of them  to be interviewed by us – and also to invite translators from Russian to submit ideas for our forthcoming funded translation initiative (more details on our website in the New Year). Most importantly, we hoped to make new friends in the translation world, which is in many ways interdependent with academia, yet intriguingly different.  This was our first time attending ALTA, and although not our first translation conference, this was our first translator-focused event! This year, the encompassing theme was ‘Sight and Sound’, approached from three angles: practical, theoretical, and creative. With 265 presenters – literary translators, publishers and editors – from across America and further afield too (Korea, various locations in Europe, not forgetting Exeter University, UK), this meant a grand total of 70 translation-based sessions (panels, workshops and round tables).

So, already, this was a good year to be attending, and  even more so from a Russian literary perspective. Thanks to the organisational skills of several US-based translators (Marian Schwartz, Kate Young, Mary Jane White, among others) and much planning on social media back in Spring 2019, we arrived at Rochester to the bumper prospect of 4 (!) panels dedicated to Russian literature, with an additional session for Slavic bilingual readings (which took place on day one, with contributions in Russian and Bulgarian by: Jim Kates, Izidora Angel, Sibelan Forrester, Alexandra Niemi, Tatiana Samsonova, and Anya Krushelnitskaya, offering her wonderfully entertaining rendition of Chukovsky’s Мойдодыр, see below) and a Russian translation workshop. 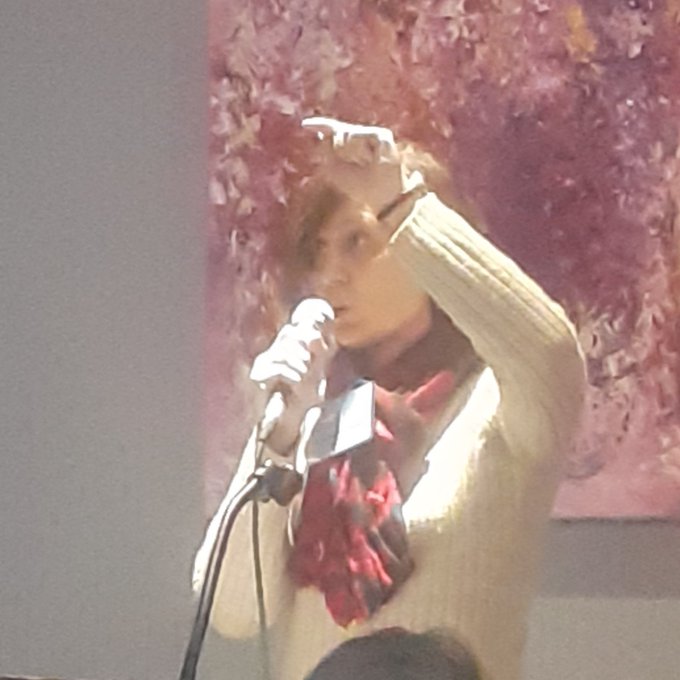 And as if things couldn’t get any better, there was even a fun (extra-curricular) evening thrown in of poetry and prose recitals courtesy of Olga Zilberburg, Olga Livshin and Dmitrii Manin (see below). 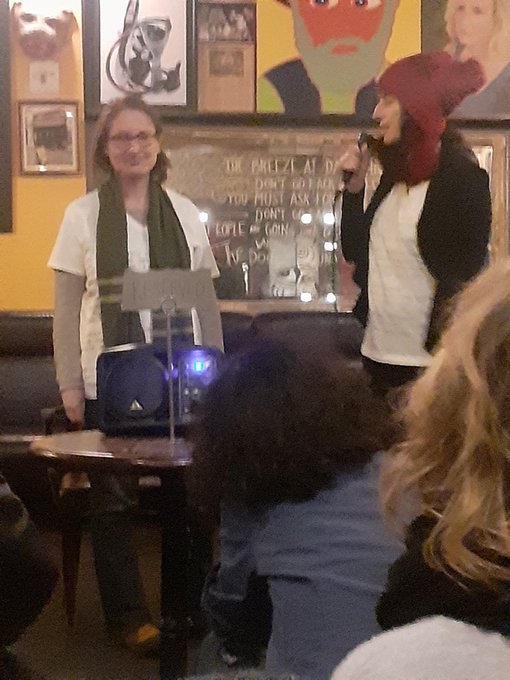 We had three packed days listening to translation publishing discussions from some of the biggest names in US literary translation, we picked up industry tips from round tables of expert practitioners (from celebrity  translators… Julia Sanches, Elisabeth Jaquette, Emma Ramadan, Daniel Hahn, and Marian Schwartz…. 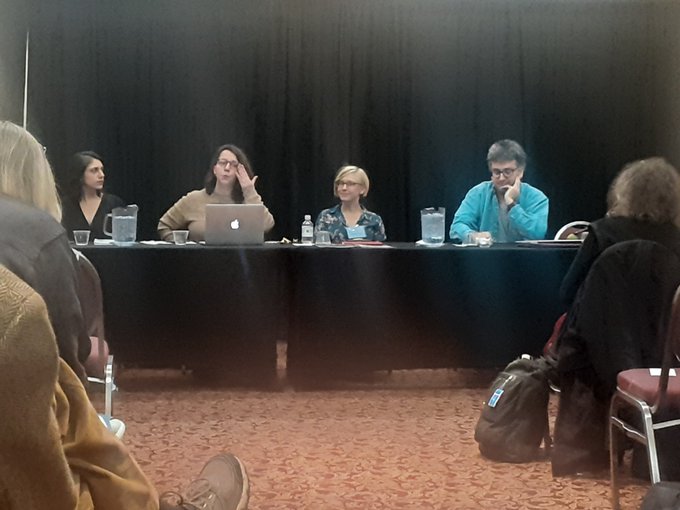 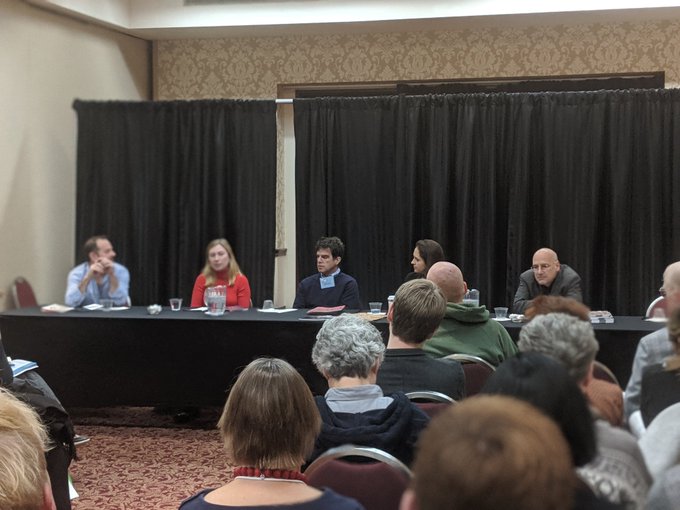 We made our own pitches to publishers and editors, who were kind enough to give us their own personalised tips, jostled for table (and air) space in the packed and highly animated Russian translation workshop (fuelled perhaps by Russian chocolates and priyaniki – thank you, Mary Jane and Isaac Wheeler – no knut needed). At lunchtime, we availed of the Rochester food trucks (even translators need sustenance!),and we were even treated to a trip to the amazing Niagara Falls (90 miles away, in the snowy north) before the conference officially opened, along with seasoned reptilian blogger and translator Russian Dinosaur, pictured below (Carol Apollonio – we can’t thank you enough!). 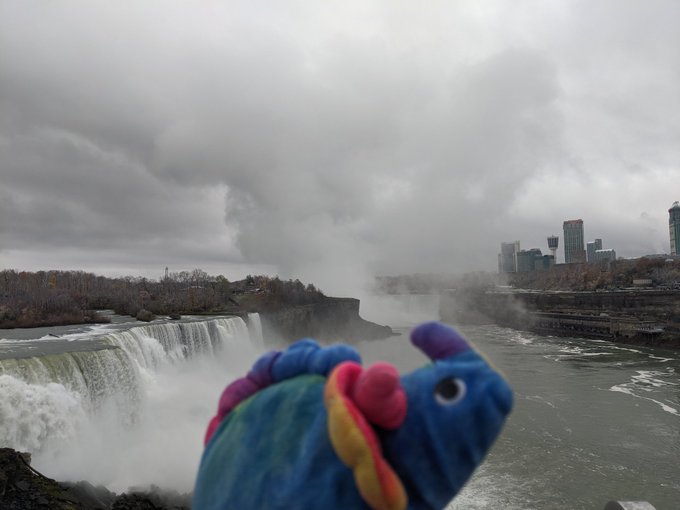 So now for some details. The four Russian panels held this year were:

From Zaum to Samizdat: Translation Beyond Reason with Matvei Yankelevich (moderator), Tom Kitson, Ostap Kin, and Rebekah Smith, whose panel entertained with plenty of creative sights and sounds all connected with words that ‘have no definite meaning’. We were treated to examples of visual/creative translation challenges by Rebekah Smith, Ostap Kin shared audio and visual challenges he’d experienced while tackling Semenko’s poetry, and Tom Kitson treated us to the polyphonic genius of his multi-voiced garage-recording of Zdanevich’s avant-garde poetry (you can see the visual representation of Zdanevich’s multi-vocal poetry below). 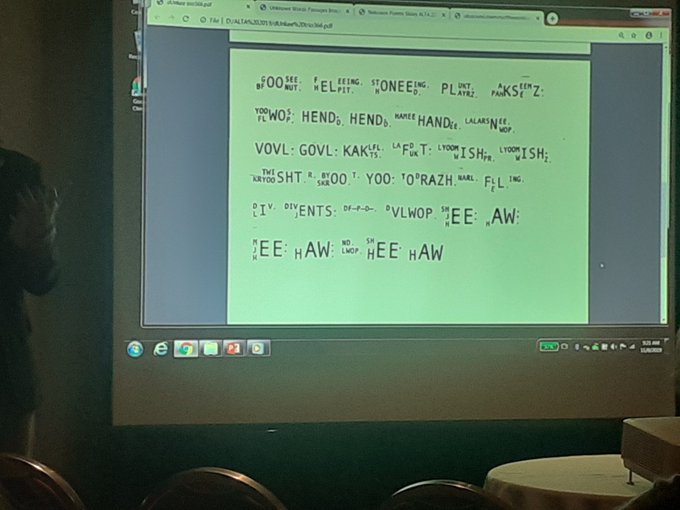 Russian Poetry and the Internet with Josie von Zitzewitz (moderator), Isaac Wheeler, Olga Livshin and Sibelan Forrester, whose panel presented a fully modern view of ‘seteratura’, i.e. web literature, where, in the absence of small presses, Russian poetry is increasingly finding a presence. Discussion explored the flexibility which online publishing presents; unlike printed publication, online poetry posts can be augmented by hyperlinks and audiovisual enhancements, developments which are teasing yet more from the genre. 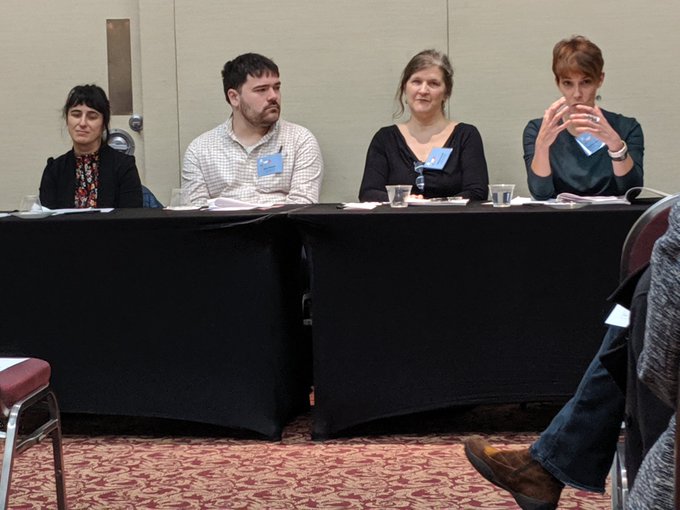 Russian Fiction Outside its Gilded Cage with Marian Schwartz (moderator), Olga Bukhina, Shelley Fairweather-Vega, and Hilah Kohen, whose panel focused (respectively) on Russian writers for young readers, non-Russian Russian writers, and young Russian writers, all of whom have ‘yet to make a dent in English translation’. Themes for discussion included the abundance of Young Adult writers in Russia who have yet to find a voice in English translation (writers whose depictions of everyday youth in Russia are seemingly less appealing for translation into English than texts which perpetuate harder-hitting Russian themes of trauma and tragedy) (Bukhina); the brimming enthusiasm of young Uzbek writers who have no national publishing infrastructure beyond an anachronistic Writers’ Union to bring their works to publication or translation (Fairweather-Vega); and young Russian writers who are using a social media presence to experiment with genre, to create online persona, and to give voice to fresh themes for Russian literature (climate change, LGBTQ+, gender equality) (Kohen). As Olga Bukhina said: Russian literature is ‘a gold mine, not a golden cage’!

Muireann and I had to wait until the very last slot on Sunday, the last day of the conference, for our own panel, The Politics of Being Heard, which we shared with Boris Dralyuk (literary translator and Executive Editor of LA Review of Books) and Kate Young (poet, translator, and inaugural poet laureate of Arlington). 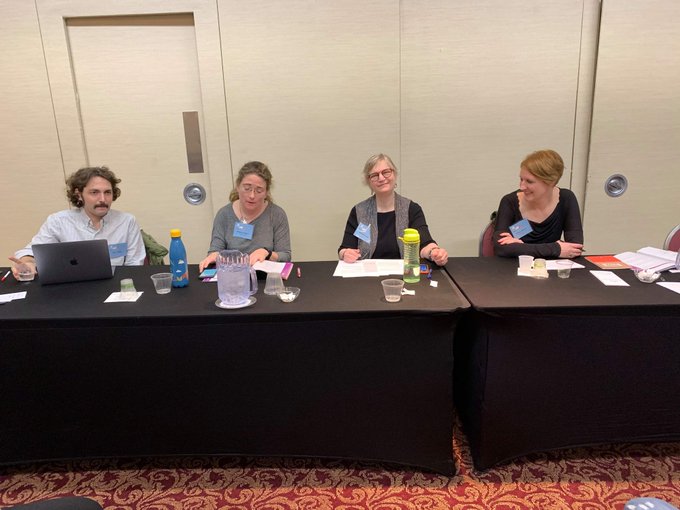 Here is how our session was billed in the conference programme, and it’s also how Kate, our moderator, introduced our panel:

“Who is heard depends on who is listening. And who is listening can be a complicated question. Who funds translation and for what reasons? While the intelligence community has historically subsidized both language training in and literary translation from Russian, cultural, religious, and philanthropic concerns, as well as the politics of emigration, have also influenced publication decisions. Round table participants will look back over decades of translation of Russian and Soviet literature into Irish and English to ask which authors were published by which publishers with whose money. They’ll also discuss what has changed – and what has stayed the same – in publishing Russian literature today.”

And that’s exactly we did. We started by going back in time for an overview of who had translated and published Russian literature, for which reasons, at whose expense, and when. Muireann started by explaining Ireland’s political reasons for translating Russian literature into Irish in the early 20th century. She introduced the audience to the central figure of her own RusTrans Case Study, Maighréad Nic Mhaicín (otherwise known as Daisy Mackin). Muireann shared her research into Daisy’s work as a translator in Stalin’s Russia and as a translator of Chekhov and Turgenev for the Irish Free State’s literary translation project An Gúm. Muireann’s conclusion brought Daisy into the present day by explaining how some of her translations have been published again more recently, but this time, without any apparent respect for copyright.

I used my slot to bring the focus to the mid-twentieth century, examining Penguin’s Russian Review, which aspired to ‘allow […] Russia herself to speak through her imaginative writers and poets’, the Penguin Russian Classic translators who used translation to counter Russian political stereotypes and project a different, more accurate image of Russia abroad (while finding their own voices, and kudos, as émigrés in the UK), and explained Penguin’s role in publishing Soviet literature; in particular, the (expensive and hasty) race to publish Solzhenitsyn.

In less than 7 minutes, Boris succeeded in succinctly summarising all eras of Russian literature in translation(!), reminding us that the first copy of Gogol’s Dead Souls was wrongly but quite deliberately depicted as real life (Home Life in Russia), and that the doyenne of Russian literary translation herself, Constance Garnett, had been galvanised to become a translator because of the highly politicised Russian company she kept in London. Boris neatly brought us back to the present day with his thoughts on where Russian literary translation currently finds itself, and how the translator (rather than the author) can be viewed as a vehicle for selling books in translation. As per the Penguin years when a new Dostoevsky translation could be promoted by repeated mentions of the translator, Boris observed the same occurrence about modern literary translation too: trust in the translator can serve as an effective way of encouraging a devoted reader to try an author they’ve never read before.. which led nicely to Kate Young’s expansive overview of the industry today…

Kate discussed her own proximity to the politics of being heard, touching on the role her translation has played in publicising Azerbaijani author Akram Aylisli’s Farewell, Alys. (For more details about Kate’s involvement, see my previous blog, Manuscripts Burn at Pushkin House, March 2019). Kate had also gathered a breadth of views from (absent) translators Ruth Akhmedzai Kemp and Lisa Hayden who, in advance of ALTA, had both kindly offered observations and questions about the Russian literary translation industry. Discussion between panel and audience ranged from extolling the good work of small publishers (thank you Open Letter Books, the Russian Library, Tilted Axis Press, Deep Vellum, Dedalus Books, Glagoslav, And Other Stories, to name but a few!) and exploring reasons why big publishers are cautious to commission contemporary Russian literature (it’s the Classics that keep on selling!). We explored the role of agents, prizes, and how maybe the time has come for prizes to set aside some of the funds for supporting bigger translation samples, in other words: compensating translators while they prepare for a pitch. A constructive note on which to draw our ALTA panel, and the whole conference, to a close.

A rare sight: Books on sale at ALTA, alphabetised by translator!