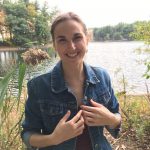 Read her laugh-out-loud extract from You Love These Films So Much here.

A Film by Any Other Name

Figgle-Miggle’s Ty tak lyubish’ eti fil’my (literally, You Love These Films So Much) is an unconventional crime novel loosely structured around a series of murders that take place among the Saint Petersburg intelligentsia. It is comprised of short sections told from the viewpoints of five different characters: a dachshund, a drug addict, a double agent, a film critic, and a schizophrenic.

In our first conversation, the author gave me two instructions for translating her work. First, “Don’t dumb down the dog too much. Let him use a big word every once in a while.” The second was that I find a place to include the word “prudish,” an English adjective she is particularly fond of.

These instructions are telling. The first speaks to the importance of voice in Figgle-Miggle’s work, the irreducibility of the characters she creates. The dog in question is Korney, a comically macho, self-important dachshund and the constant companion to Princess, a glamorous and acid-tongued academic. But just because he provides the novel with much of its comic relief doesn’t mean that his voice shouldn’t be complex. His vocabulary is a reflection of his personality, but it also offers a funhouse mirror insight into the world that surrounds him, the world in which the action of the novel takes place.

The author’s second request is a reminder of why many people start writing in the first place: the sense that words are there to be enjoyed. Figgle-Miggle is interested in the texture of a text, in using language to create worlds with a flexible and insidious internal logic. Her pseudonym comes from the delightful word figli-migli (“shenanigans”), and she is nothing if not a trickster. For years, her true identity remained a secret. Though she frequently appears on the long- and short-lists of major Russian literary prizes, winning the prestigious National Bestseller Prize in 2013, she is still known for her reclusiveness. Her sharp, yet supple satire has led critics to liken her to Nikolay Gogol and Jonathan Swift. Perhaps the defining sensation of reading Figgle-Miggle is feeling the ground shifting under your feet.

Because the narrative perspective is constantly changing, the novel has a mosaic structure. However, the pieces don’t fit together neatly. And, as you may have noticed, the narrators are meant to seem unreliable in one way or another: either by profession (the double agent), by mental illness (the drug addict and the schizophrenic), or by species (the dachshund). The film critic doesn’t inspire much confidence, either. Strikingly, all of these perspectives are male – even the dog’s. However, over the course of the book, we learn that the central node connecting all of these characters is the highly-strung, highly-educated Princess. The dog is her dog, the double-agent is her husband, the drug addict is her brother-in-law, the schizophrenic is her neighbor, and the film critic is her lover. Princess’s mother, a powerful woman with mysterious business ties, also flickers ominously at the edge of our vision. The reader constantly finds herself trying to catch a clear glimpse of the women in this world – the author included. This, too, is part of Figgle-Miggle’s mischief: the most important things seem to lie just beyond our grasp.

Oftentimes, a book’s title will provide some kind of framework for understanding and interpreting the work. When dealing with such elusive material, finding a title for the English text becomes particularly complicated. The original title of this book, You Love These Films So Much, comes from a song by the legendary Russian rock band Kino. In it, the band’s frontman, Viktor Tsoi, declares that he no longer wants to be a part of the movies playing in his partner’s mind. The song’s tone is measured, embodying the matter-of-fact diagnosis the singer issues for his failed relationship: “I knew things would go bad, but I didn’t know it would be so soon.” Because this song is so well known, the book’s title will evoke a particular atmosphere for Russophone readers, and might even set the tempo for their reading. Of course, an Anglophone reader couldn’t be expected to have the same kinds of associations.

As I consider potential English-language titles, I have been thinking about the aspects of the original I most want to capture. First and foremost, I want to maintain the emphasis on narrative and the way that the stories we consume can affect how we perceive and re-present the world around us. At the moment, my favorite option is Screen Time. On the one hand, this phrase makes us think of the amount of time we spend looking at our screens and the narratives we engage with as we do so. It also suggests the seductive pull of our devices and our (often futile) attempts to limit their power over our lives. On the other hand, this proposed title raises the question of whose stories and perspectives are featured in the novel, how much ‘screen time’ is devoted to each, and, last but not least, what the other characters get up to when the camera’s not on them…

Read an extract from You Love These Films So Much here.

Translator, author, and Moscow Times columnist Michele Berdy writes about the author Tasha Karlyuka, whose novella Being Frosya Shneerson Michele is translating with support from the RusTrans project. You can read an extract from her translation-in-progress here.

Several years ago, the Short Story Project, a web-based program based in Israel, sent me a text to translate by a young writer named Tasha Karlyuka. Born in Kyiv, living in Tel-Aviv and writing in Russian, she works as a chef while writing screenplays and prose. I sat down to read it and instantly fell through time and space into a Soviet communal apartment by the sea, where a troubled teenage girl lives with her larger-than-life grandmother and eats the only thing her grandmother knows how to cook: chicken morning, noon and night.

I instantly fell in love with the writing — the kind of storytelling that carries you along, as if you were listening to your friend sitting across the table in a café or your kitchen, telling you about what it was like growing up. She’s very, very funny as she describes Uncle Isaac cutting up “Mein Kampf” for toilet paper in the shared toilet or the vendetta between her grandmother and a neighbor who can’t forgive her for stealing Lenya Utesov away 56 years ago. Karlyuka has an eye for the absurd in human relations, sympathy for outsiders and misfits, and a gift for seamlessly moving from comedy to the surreal, from the pain of being human to beautifully lyrical observations.

Some of Karlyuka’s characters are émigrés — from the former Soviet Union and Africa — but she doesn’t write about émigré life per se. She writes about being Black in a white country; being a religious Jew with people who are not; being desperate; being in love with everyone but the right person. She often writes about an enormous, dysfunctional, multi-national, multi-racial and multi-confessional family in a way that reminds me a bit of the young Philip Roth — or rather, it would if he’d been a woman with a master’s degree in psychology and walloping great sense of humor.

Karlyuka’s novella Being Frosya Shneerson (Byt’ Frosei Shneerson) is about a little girl — the Frosya of the title — born into this large family. Grandmothers, grandfathers, parents, aunts and a great-grandmother all vie to control Frosya’s upbringing. One wants to turn her into a good observant Jew; another wants to baptize her; her mother, a famous pianist, wants her to be “the female Mozart,” while another grandmother feeds her whole grain oats and nori; an aunt arrives with her new husband, who is Black and a Muslim, and news that she is pregnant. Her father, a tailor, is considered the family failure — but he is the person she loves most deeply, even as he leaves a trail of threads, pins, and fabric scraps wherever he goes. And Frosya? She is the product of this family: strong-willed, wicked and too smart for her own good.

Karlyuka’s Being Frosya Shneerson is shortly to be published in Russian: a Russian-language extract from the novella in Snob magazine can be read on this page.

Read an extract from Michele’s translation of Frosya’s adventures here!