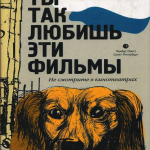 Excerpt from You Love These Films So Much (Ty tak lyubish’ eti fil’my) by Figgle-Miggle, translated by Sarah Vitali. This section is narrated by the heroine’s dachshund, Korney, who’s a lot more than ‘a bit of fluff with a tail’.

We came back from our walk and went to wash our paws. Oh, fuck, fuck, that hurts!!! We’re not supposed to get that wet! The quack said to rinse it out with potassium permanganate, not to bathe in the stuff! It’s bad enough my ass got stuck full of holes, now you’re gonna wash it, too! And then with the towel! “Let me get your wee-wee.” Dummy! You might have a wee-wee, I’ve got a package.

So we got dried off, had our paws smeared with cream, and put some striped kiddie socks on top. The socks were the smallest ones they had at the store, but we still had to sew them in half, and Princess attached snaps to them. They look like the foot-bindings soldiers used to wear. I sit on the windowsill, wearing my socks. I look out over the courtyard.

I’ve got street cred in our yard. The meathead Rottweilers and the show-off Staffie might grumble, but only from a distance and with all due respect – that’s since Princess broke her two-ton heel against the Staffie’s jaw. She broke the Staffie’s jaw, too, come to think of it.

The Staffie had thought that I was just a bit of fluff with a tail, that nobody had my back. And of course it was a new place, a new courtyard – how were they supposed to know that, where we come from, the annals record countless scuffles, two court cases, and a gang fight: luckily, our paramour back then was an even tougher gangster than the snot-nosed punks whose Airedale’s ear I tore. And so what if I did? He barked first.

But we made ourselves at home in the new place soon enough. Authority is like fur: it grows fast on a healthy body. Each time I get stitches, they shave everything down to the skin, but before you know it, teensy little hairs start poking out from underneath, and soon those little hairs turn into a thick, protective coat.

So anyway, in the courtyard, I can see all kinds of cheerful-looking riff-raff out and about: children, Pekinese, and one crazy, puny pup that looks like a Rottweiler in miniature. I could run with him at least, though not in the park. Or go digging in a great big pile of fresh sand, dig a Ditch in it. I don’t like sitting around at home all by myself.

After the incident with the peach, Princess was so mad at me that she stopped taking me with her to work. And just who are you punishing with that? It might be boring for me to sit at home surrounded by my own four walls, but what’s it like for you out there, surrounded by your enemies?

Princess gives lectures and leads a seminar in the Aesthetics Department at the Institute of Culture. The Institute of Culture is a shameful, indelible stain on our reputation. The motley crew of scholars and scribblers accredited by this Bubbling Cauldron of Inspiration and Knowledge seems to have been brought together based on the principle that “if we all pitch in, we might manage to throw somebody overboard.” They mix up, muck up, spoil, and besmirch everything that they touch, and they growl when anyone tells them off for it. In such moments, Princess sometimes stamps her foot and shouts, “Quiet! Don’t you dare talk back, you trade school loser!” And then she scoops me up under her arm and whines, “Sharing a curriculum with these trade school losers! I would be better off scrubbing floors! I am a University Person!”

If anyone else pulled a stunt like that, they really would be sent off to scrub floors, but our department chair knows all too well that University People don’t grow on trees, and asks only that we stomp our feet and shout a bit more quietly. “Sasha,” he pleads, “sometimes we have to make compromises.” “I make countless compromises every day!” she wails. “Only, for some reason, I’m the only one who notices!” “You could try being a little gentler,” he pleads, “a little more polite.” “You can say something politely five times, but the sixth time you have to say it so they get it through their skulls!” “But why did you have to throw an encyclopedia at him?” the poor man mumbles. “And so what if I did? I missed, didn’t I?” Princess suddenly recollects everything she’s been through and starts to boil over. “And what if I tell you that he said that Dostoevsky wrote Alexander III a letter asking him to pardon the late tsar’s assassin? I asked him, ‘What, did Alexander III dabble in spiritualism? Or has there been postal service to the other side for a while now and I just missed it?’” “So what did he say?” “And that trade school loser opened his eyes up wide, as if for the very first time, and his face said more than that letter ever could, by which I mean, it was a total blank. So I pick up an encyclopedia to show him Dostoevsky’s death date, but that wretched encyclopedia that sits in your department, Mitya, doesn’t show full dates, only years. 1881 for Dostoevsky, 1881 for Alexander II…The horrid man didn’t have to undermine me like that.” “So who wrote the letter, then?” asked the department chair, his interest piqued. “Was there a letter in the first place?” Yes, it was a good thing Princess’s hands were empty this time. But she inhaled deep into her lungs and shrieked, “Tolstoy, damn it! Lev Tolstoy! If it wasn’t Dostoevsky, even an idiot could guess who it was!”

After that, the department chair stopped interceding on behalf of his teaching staff. But he had more sympathy for them than before. Princess, of course, read him the riot act. “You’ll get to the Final Judgment, Mitya, and you’ll say, ‘I didn’t sing those songs,’ you’ll say. ‘Didn’t sing them, but I danced along!’ ‘Off to hell with you!’” And even then, he didn’t say, “What should I go to hell for, Sashenka?” He had probably gotten used to being sent there, it was like taking a little walk around the block. But our spouse, he got drunk one time and shouted, “I’m already in hell! Already in hell!” Found himself a good excuse to have a meltdown.

Our colleagues had stopped speaking up a long time ago, but it didn’t occur to them to clean up their acts, either. They couldn’t care less who wrote whom a letter in the spring of 1881, or in any of the years that followed. Posts in the Aesthetics Department aren’t what you’d call cushy; some people tough it out with the expectation that things will get better, while others live out their days without any expectations at all, as if the place were an almshouse. An inventory of their ideals appears on the price list for exam grades. This list hangs on the back wall of the little cupboard that separates the departmental assistant’s desk from the rest of the room – it’s not a very conspicuous corner, not a very reputable one, but it’s easy to get to. Before finals, the students dip back there, and the teachers do, too: jotting down new prices, crossing out old ones. The only people who don’t run a trade in exam grades are the department chair (it would put him in too vulnerable a position), old man Ivan Petrovich (sticking a student with a D, or, if he’s lucky, even an F, is the only pleasure left to him in life), and Princess and me – because we’re honest and hardworking. Haters whisper (they sit behind the cupboard, so they think that I can’t hear them) that, with a husband like hers, Princess doesn’t have to work at all. Oh, you heathens, you savages! Is money really the most important thing in life?

So anyway, I’m sitting on the windowsill, looking out over the courtyard. I sit and I watch. Like a Roman stoic. Like Alexander III, clutching a little note from Lev Tolstoy in his hand. Which is to say, he had a little note, and all I have is an awe-then-tick state of mind. Awe-then-tick. Nie wiem whether I’ve said it right. At least it sounded smart.

And suddenly I saw that something had happened in our courtyard. While I had been busy eyeing up the Pekinese, out of the blue some guys had driven up with flashing lights – an ambulance and a fire truck and even some cops. Whoa! I pressed my nose up against the glass. The noise was coming from the next entryway over, but how was I supposed to get a good look? I couldn’t catch a glimpse, no matter how much I contorted myself this way and that, and I couldn’t go out onto the balcony by myself. Princess takes me for a certified dope, thinks I’ll shimmy my way through the railing, on the fourth floor, no less. Isn’t she a dummy? You have a dachshund, you dummy, not a ferret with a death wish. You could at least do some measurements to check who can shimmy his way out of here and who can’t.

Finally, they came through with a stretcher, an empty one, mind you, and everyone cleared out except the police. A big gray car came rolling up later, though, and the stretcher came out again, carrying someone all wrapped up. I speculated and spun around in circles, burning with curiosity. What was going on down there? What was it? The looky-loos were standing around quietly, and from the solemnity with which our dear policemen were walking back and forth, it was immediately clear that they were performing their official duties. I spotted Snuffles and her owner in the crowd. No question, Snuffles is a grade-A dimwit, and everything she’s seeing and hearing right now will have floated out of her head without a trace before evening. But her owner will say something to Princess and Princess will tell me. It’s not the best option, but it’s no use waiting for a little birdie to tell me. Ooh, I’ve got such a feud going on with those birds! Bombing campaigns have got nothing on us. 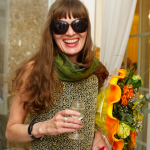 From You Love These Films So Much (Ty tak lyubish’ eti fil’my) by Figgle-Miggle, translated by Sarah Vitali. You can read more about Figgle-Miggle, and why Sarah is translating this novel, here.