Pity the aspiring, young, male Russian author. Not only must he sit in the hairy, literary shadow of the men with long beards from the 18th and 19th centuries – Tolstoy, Dostoevsky, Pushkin, Turgenev, Lermontov, Gogol (ok, he was more moustachioed than bearded). But he must do so in the knowledge that several of the aforementioned greats were already gaining fame and recognition in their early twenties. No pressure, then.

Of course, the impulse to write is born of far more than a simple desire to compete with those who went before; and thankfully, the clean-shaven 29-year-old author Bulat Khanov, whose novel Gnev (Anger) I am translating as part of the RusTrans project, appears entirely uninhibited in his desire to depict the modern reality of 21st century Russian life and the complex set of challenges it poses – to the male psyche in particular. 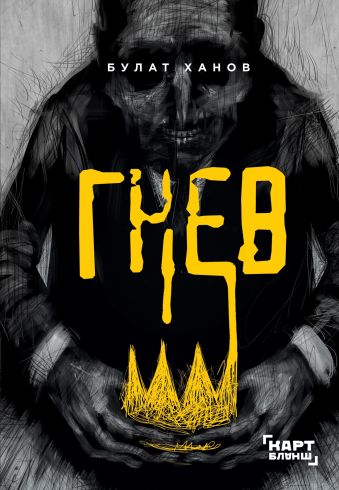 After the Kazan’-based author won awards for his 2018 story Distimiia (Dysthymia) (defined as  ‘persistent, mild depression’), Eksmo published Gnev in July 2019 and his next novel Nepostoiannye velichini (Unstable Values) in October of the same year. Last month his latest work, Razvlecheniia Dlia Ptits s Podrezannymi Kril’iami (Fun for Birds with Clipped Wings), hit the bookshelves. Khanov is certainly not sitting about twiddling his thumbs.

In March 2020, a commentator for Russia’s Big Book Prize noted that ‘the common thread running through all his works is that of an educated, intelligent person struggling to deal with the harsh reality of Russian life’ and this is certainly the case in Gnev. I remain unconvinced about using Anger as the English title – its protagonist, disgruntled academic Gleb Veretinsky, is suffering from some complex, obscure and deep-rooted malaise that the word ‘anger’ doesn’t quite capture. Other established young Russian male authors like Dmitry Glukhovsky, who wrote Metro-2033 (about a community of survivors of World War III living in the Moscow metro) aged just 22, and Alexei Salnikov (whose The Department is incidentally also being translated for the RusTrans project by Lisa C. Hayden), often site their work in some kind of post-apocalyptic context. Activist writers like Sergei Shargunov (A Book Without Photographs) and Zakhar Prilepin (The Pathologies, The Cloister) use their experience of contemporary military conflicts such as Chechnya as a platform for expressing oppositional politics. Khanov is different. In 2018 he described how he and his fellow millennials possess a ‘symptomatic kinship’ with the Sixtiers, that generation of Russian writers of the 1950s and ‘60s who resisted the cultural and ideological restrictions of Soviet-era communism. Rather than taking a journalistic approach to depicting realism, they use fantasy, parable and metaphor to represent reality, in other words, they write about reality without talking about it directly. In this, he may share an aesthetic with his contemporary Alexander Snegirov, whose novel Vera won the 2015 Russian Booker prize. Vera depicts a woman’s struggle to find love and hope (or perhaps, as the title suggests, faith?). Snegirev also wrote Petroleum Venus, about a successful architect who turns his back on his career for the sake of his son with Down’s syndrome. Yet the parallels are not easily drawn. Khanov is speaking in his own way for his own generation as he tackles head-on modern obsessions like social media and pornography, and in Gnev he layers his characterization in such a way that the reader is always unsettled. The narrative is focalized from Veretinsky’s third-person viewpoint, yet it also manages to talk to the reader directly, forcing them to ask questions of themselves. Are we with Veretinsky, or against him? Are we inside his head, or outside, looking in, and down at him? There are times when the reader cannot help but sympathise with the protagonist, for example in Chapter 5 of the novel’s first part when he wanders back through Kazan past groups of workers and students going about their normal, everyday business:

‘Both in life and in literature we are experiencing a dismal era of decline…The realisation has already dawned upon thoughtful and subtle-minded people that we have expended all our energy, become exhausted and dim-witted, that the old ways no longer satisfy us yet we cannot find new ones, that words are worn out, decaying and they bore us ad nauseam, that thought has grown so decrepit and lacklustre, that life, with its past and its present, with its culture and its evolution, seems little more than a stupefying sleep from which there is no awakening!…’

The paradox here is that Veretinsky seems to be harking back to a time when the present (which he so despises) was the future, offering potential for artistic innovation and hope; and to hell with the past.

Khanov’s quotations of comparatively obscure poetry provide a significant translational challenge. In the original Russian, they are hard to detect as they are not attributed, or even denoted in italics. On the assumption that footnotes ask too much of the contemporary fictional novel reader, I have followed a policy of using italics and occasional attribution, the latter only when the flow of the narrative is not hindered; enough, hopefully, to coax the reader in English to go and seek out the author if they so wish without requiring them to do so.

I chose to translate Gnev after reading Khanov’s short story “Zdes’ vse po-drugomu” (“Everything Is Different Here”) which was published in the literary magazine Оktiabr in 2019. This story follows a visitor to a remote part of northern Russian who poses as a journalist interested in profiling the local community’s unspoilt, uncommercialised way of life, only for it to be revealed right at the end that he is really a television executive scoping out a location for a reality TV show that will shatter their quiet existence. This idea of playing a role, posing externally as someone completely different from your internalised self, is central to Khanov’s portrayal of Veretinsky in Gnev. The novel also taps into the paternal anxiety that I feel, as the father of a young boy myself, about the impact of society’s wholesale commodification, technology and social media on the mental health of young males. My background teaching for a number of years in UK Higher Education meant the novel’s university setting was also a natural draw for me and many of Khanov’s observations about the sector chime with my own experience. They also provide moments of much-needed humour, for while Khanov shines his light into some of the murkier corners of the male psyche, he does so, not through some insistently dreary form of realist chernukha, but with a humorous glint and an occasional wistfulness that serves to lighten the novel’s tone, despite its underlying darkness. These attributes lend Gnev a fresh, universal appeal that travels well beyond the confines of its setting in Kazan – after all, how many authors can cite lines from both English rock band Oasis and Ego-Futurist poet Riurik Ivnev to describe the collapse of a relationship?

Ultimately, it is almost as if the very educated nature of Veretinsky itself, placed against the backdrop of the sleazy, shabby reality of his existence, is what tortures him most and tips him over the edge. As a translator, there is something fundamentally exciting about uncovering all the nuances and interpretative layers of a work by a developing young author, bearded or otherwise. Gnev is a disturbingly frank study of 21st century male angst and I am sure I will not be the first reader to be left intrigued and unsettled by it. With RusTrans’s help, I hope I can bring it to the wider audience it deserves.